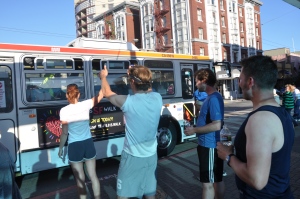 Where you been bus? Get a flat?

6:10 pm Wednesday, July 20th 2011. I arrived at the corner of Fillmore and Bay to find a group of 5 or 6 people stretching their legs. Yikes…I thought…it’s starting!

As I chitchatted with the first-comers, and suggested they warm up their legs, others showed up. Every time I turned around there were more people. My head was spinning as I tried to go over the “rules,” route and basic game plan. In my mind there was a lot to do. The initial plan was to get everyone to participate in a warm up sequence but alas all we did was swing our arms around.

As we warmed up (swung our arms around) I sent Mo over to make friends with the bus driver. Armed with a goodwill offering of a box of cherries (why cherries? Because they’re healthy and were on sale) Mo bravely went over to politely let our victim know what was about to transpire. I figured if he knew what we were up to, he might make an effort to travel at a respectable pace and play along.

After the cherries were delivered it took the bus about 10 minutes before it slugged over to the starting line at the corner of Bay and Fillmore. According to the official MUNI schedule the bus was scheduled to depart that out location at 6:32, it was 6:40 when it pulled up to the line (no surprise there). As the bus arrived it lined up at the light, loaded a few passengers and when the light turned green, bus and runners were off.

The pace down Fillmore to Chestnut was reasonable; the runners kept perfect stride with the bus all the way to the light at Chestnut. At the light everyone including the bus (obviously) stopped. When the light turned Green the runners went, immediately leaving the bus behind. That was the last any of us saw of the bus until the finish line, 1.5 miles up the road. Not only did the runners drop the bus they were racing in the first block, they caught up to, and passed the coach that had taken off some 5 plus minutes previous to the one we were racing.

It was amazing watching everyone run up the hill! 4 blocks of hard climbing! Every single person (and lady Jane, our K9 Mascot) dug incredibly deep, they even beat me to the top and I was on a bike! Geez!

In the end everyone seemed to have a great time, thanks to generous donations we had some fine top finisher prizes as well as a couple honorable mentions, all going to very impressive competitors.

Special thanks go to Brock at The SFist for helping me get the word out, Team P for their photos, support and bell ringing. I’d like to thank racer Ross for documenting the event and sharing his video and photos, to Mo for being Mo and to my two other fav Ab’s (that’s code) you made this event happen!

Finally, a huge THANK YOU to everyone who came and raced, brought their friends and had a good chuckle. This is the way life should be, a little nutty, a little challenging, and a little hot and sweaty!

P.s. Thank you for playing Mr. Bus! See you again next month. You might want to work on your hill climbing between now and then… Just sayin’

P.s.s. Wanna see more pix and a video of this event? Check out our Facebook page!