The cold & laughter, a good combo

Yes, apparently fidgeting can help you burn up to 350 calories a day. This, according to research done by the Mayo Clinic. Think about it, have you ever seen a fat hyper person? I can’t say that I have but maybe they exist.

Since I find fidgeting annoying I’ve found a few other ways to burn extra calories you may not have considered.

Laughing – 15 minutes of laughter can burn up to 40 calories. If you laugh for 15 minutes a day you could lose 4 pounds in a year. How easy is that?

The cold is your friend – You burn more calories when it’s cold. Not only does your body have to work harder to warm itself, in cold weather we tend to wear heavy clothing. The more weight you carry around the harder you body has to work, hence the additional calorie expenditure. So bundle up and go for a walk, run, ride, in the cold air. Research claims you’ll burn up to 7% more calories.

So, by my calculations if I were to go for an hour walk in the cold with a funny friend I could burn an additional 173 calories. Hummmm…

Hummm, what shall I try first?

I hate to do this to you, but it needs to be done. As I’ve said before, Halloween marks the beginning of the season of eating. It starts with Halloween candy on Halloween and ends with champagne brunch or a greasy hangover recovery meal on New Years Day. In spite of our best efforts most of us end up adding layer of blubber to our winter coats during this period.

Let’s start with Halloween. Obviously the best way to keep from packing on the pounds is to completely abstain from taking a dip into the candy bag. Since I’m pretty sure every one of us (except for me because I’m perfect) is going to sample at least one treat this Halloween, there are a few things to consider.

While I really do try to stay away from the candy I understand the desire to indulge. With that, I hope you will simply remember to work a little harder this season to keep from busting out of your holiday gear. Remember, calories in, calories out.

As always I’ll be here with suggestions so we can all stay fit and fine this yummy season. 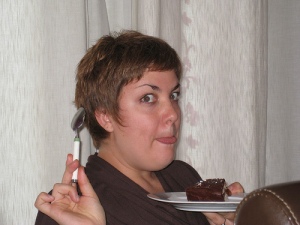 No, I don’t mean it’s okay to cheat on your lover. I’m referring to cheating on your diet.

It might seem counterintuitive but taking a break from your healthy eating regime can actually improve your chances of sticking with the program longer. It’s just like building recovery time into your workout schedule. You don’t go hard all the time. You have to back off once in a while to allow your body time to build muscle and get stronger.

Sure, eating a cupcake is not going to make you stronger or help you recover from a hard workout. But, eating something that’s “forbidden” will allow you to feel less deprived. Research shows that people who deprive themselves of the things they crave end up eating more calories in the long run. There’s also information that states, “restrainers” have lower metabolisms and higher levels of cortisol, the stress hormone that tells your body to store fat.

Here’s the question; when should you cheat and how much should you cheat? Well, that all depends on you. How much and how hard you workout, how good your daily diet really is, what are your goals, stuff like that. Basically, there’s no general answer, but there are a couple of schools of thought. One way of thinking is to eat a little something you like every day. If you really like full fat latte’s then have one, like chocolate, then eat a little every day (points for eating dark chocolate). Some people prefer to eat really well all week and have one “cheat day” on the weekend when they eat whatever they want. Frankly, it comes down to whatever works to keep you happy and allow you to maintain a healthy lifestyle.

The bottom line; There’s no need to sacrifice, keep your metabolism running high by working out regularly and feeding your body. If you do that, a cupcake here and there won’t be the end of the world, in fact, it’ll make your world better.

Chia, not just for fun anymore

Hopefully this is not new news to you, if it is, you may think I’ve gone completely off my rocker. Today’s topic is Chia Seeds. Yep, those seeds you grew on the ceramic figurines when you were a kid. We all had them. Right?

Now a days, eating chia seeds is very much in fashion. Apparently chia seeds rival the ever-popular flax seeds with their nutritional content and health benefits adding them to the list of “superfoods.”

Here’s the lowdown on Chia Seeds

There’s tons of info out there on the benefits of eating chia. Do some Googling or watch this short video if you want more. As far as I’m concerned, this is enough to get me to try adding some chia to my diet.

P.s. You can buy chia seeds at your local health food store and on-line.

The hills are alive

People ask me “how do you come up with things to write about every day?” My response is, “It’s easy, I just write about what crosses my path.”

Today while chillin’ at the nail salon waiting for my manicure to dry, I thought “let me check Twitter and see what folks are yacking about on this rainy Sunday.” Scrolling through the tweets I spotted one that read “Unusual 10-Second Exercise For Fat Loss That Doesn’t Even Burn Calories – But Fat Disappears!” Normally these messages only serve to annoy me so I scroll right past them, this time however I had to take the bait.

Here’s where things take a turn for the absurd.  The Twitter feed took me to a website titled FASTWEIGHTLOSETIPS (all one word, all in caps). That in itself made my head spin. Negotiating the page full of ads and paragraphs of miserably spaced copy I came to the gist of the “Unusual 10-second Exercise.”   Here goes – unedited, directly from the FASTWEIGHTLOSETIPS site itself (although I had to fix the word spacing it was just too much to bear!)

Lets be fair, It may work. I can’t say because I’m not about to spin around in circles five times a day. Frankly, it would make me puke and that would mess up my hydration level, which would definitely mess up my hormone levels causing all sorts of other problems.

However, if there were anyone out there reading this that would like to take a stab at weight loss by spinning I would absolutely love to hear about it. Seriously, anybody want to take the Thin by Spin Challenge? Let me know, I see some really good stories coming from this… 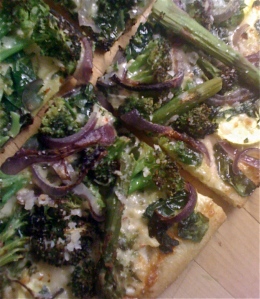 I love pizza. With that, one of my goals in life is to figure out how to eat as much as I want for the least amount of devastation. The suggestions below are a way to eat more pizza than would normally be acceptable.

Here’s how it works.

Here are some of my favorite pizza toppers (remember lots of veggies!)

Some good things to know

According to my calculations, 1 piece of these pizzas (1/8th of the pie) will cost you about 200 calories and give you 4 grams of fiber. Obviously those numbers depend on exactly what you build your pizza with but this is a pretty good, general calculation.

Bake your pie for about 20 minutes according to my experience.  The directions on the dough might say it takes 10 minutes but if you load it up, you’ll need longer. Keep an eye on your masterpiece and bake it till the crust is deep golden brown. 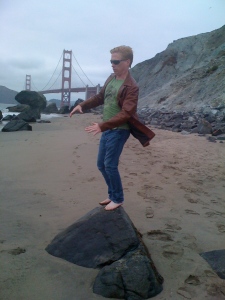 In case it’s not clear, I am attempting to encourage you to exercise in ways that are fun and interesting so that you don’t even notice that you’re exercising. The key to becoming and staying fit is to become naturally active.

When I first started working on my fitness I spent a lot of time in the gym as well as outside, working out. Eventually I gave up on the gym because it stank and I didn’t like weird guys watching me in the mirror and trying to chat me up.  I didn’t go to the gym to make friends I went to chill out and get my sweat on. This experience brought me to where I am today.

Did you know that abundant scientific evidence shows that activity in natural areas decreases the risk of mental illness and improves your sense of well-being? With just 5 minutes of Greenness (that’s my word) you’ll receive both positive short-term mental health and long-term physical benefits.

It’s really easy, all you gotta do is make sure you get outside during your lunch break, walk to work or to the bar if that’s what it takes.  All natural environments are beneficial including parks in urban settings. Apparently, green areas with water add something extra and a blue and green environment seems even better for health. That’s pretty darn cool don’t you think? Plus you get fresh air and furry critter sightings. What more could you want?

Fyi – Approximate calories burned per half hour if you’re a 150 lb person.

Owls & shadows.
Getting up at 4am is so, SO, wrong. Unless you get to adventure with this lady, and watch a buddy swim his first Alcatraz crossing. #thebestoftimes #beherenow #gratitude
San Francisco morning mood at it’s most magnificent…
It’s hot. Hotter than it should be…
The view from my office today.
Green is the new gold! #thankyoufog #gratitude #somethinggoodeveryday