Chilly on the starting line

6:00 pm July 11, 2012 – Myself and #1 assistant Kevin arrive at the intersection of Cervantes and Fillmore Street. Just minutes later a women in running gear walked up. I greeted her, ask if she was here to run with the bus and before she could say  “yes,” a spandex clad herd emerged. Within minutes there were 80 some people standing at the intersection. Holy cow!

As I attempted to meet and greet the racers, Kevin and Sally of Athleta managed the paperwork. Looking around I was stunned by the massive group, were they wondering  WTF was going on and when could they start running…? 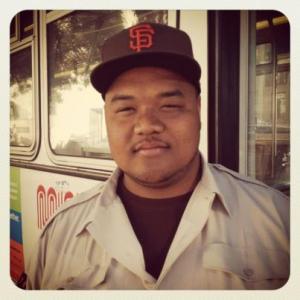 Driver of our victim

6:20 I asked Jenn Pattee of Basic Training to wander across the street to where the busses deploy. Her mission, to find and make friends with our impending victim. It took a couple of trips but eventually Jenn managed to ascertain, befriend and photograph the man who would drive our target. A job well done.

6:28 pm, shockingly on time, the janky bus started sputtering toward the start. I went into hyper drive attempting to run through the rules of the race. Just as I spit out my last word the bus pulled up at the bus stop, aka: starting line.

The second the light turned green 80 some pair of legs were off and running as the bus sputtered off down the road behind them. At the Chestnut Street bus stop, the bus was forced to stop and pick up passengers. This allowed the runners to break away, make their way across Lombard and eventually up the hill. At this point the bus had been dropped by the entire field or runners.

It wasn’t until the second block of 15% grade on Steiner Street that the bus managed to close the gap and catch the back of the field. By this time many of the racers were just blocks away from crossing the finishing line at Sacramento.  As the bus turned to make it’s way up the final climb on Broadway I did my best to block for the remaining field. My trusty SEVEN (bike) and I made every effort to detain the bus by slowly grinding up the climb in front of the coach. That’s when the bus softly tooted its horn, put the hammer down, attacked and sped past me on my left. As I crested the top of the climb and passed the bus at the stop on the corner, I head the driver yell out his window, “nice try!”

Making my way down Fillmore toward the finishing line I noticed shop owners and bystanders cheering the runners on. It was amazing to see the racers sprinting toward the finish line while dodging pedestrian traffic to the cheers of strangers on the busy shopping street.

By the time I reached the finish line most of the runners had come through and were enthusiastically cheering on their fellow racers. There were folks of all shapes and sizes, women, men, dogs, strollers, young and forever young.  Everyone had smiles on their faces. It was thrilling.

While not every person managed to beat the bus the majority of the field did. And frankly, it seemed to me as though the bus was moving a little faster than usual. Do you suppose the driver took our challenge to heart? Or maybe Muni learned of my advice to start working on it’s climbing. We’ll never really know…

Post race, we were off to the Athleta store for snacks, congratulations and awards. A good time was had by all and the excitement was flabbergasting.

Special thanks to Athleta on Fillmore for their bountiful sponsorship, of prizes, snacks, cheerleaders, promotion and general excitement for the cause! Thanks to Hint water for keeping the racers hydrated, to Lisa and Sports Basement for their prize contributions. To Jenn Pattee and her Basic Training crew, thank you for helping to make this the best Run with the Bus ever! To Kevin and all my friends who came out to support.

Lastly… THANK YOU to everyone who showed up, raced and had a good time. That includes The Bus! This event would not have been possible without every last one of you! Stay tuned… this is just the beginning…

3 thoughts on “Nice effort Mr. Bus… but we beat you… AGAIN!”