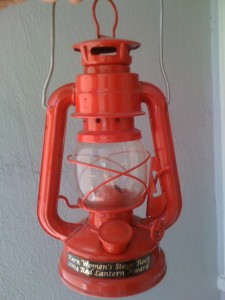 It’s not whether you win or lose it’s how you play the game, right? Well, we don’t always feel that way but it’s true. When I was racing bikes I heard one of my teammates husbands say to her as we were leaving for a race, “don’t come home if you don’t win.” He’s now her ex husband, I believe.

In bike racing an award is given to the last rider to finish the race, it’s called The Lanterne Rouge. The idea behind the Lanterne Rouge is to celebrate finishing the race rather than giving up. Riders often compete to come in last rather than just near the back as the rider that comes in last is remembered, while those who finish a few places ahead are forgotten.

The term Lanterne Rouge translates to Red Lantern and is derived from the red lantern that was placed on the caboose of a railway train.  The engineer would look at the light from the engine to make sure that no cars had come uncoupled.

In life, as in athletics hanging on is not easy when things get ugly. It’s much easier to give up, but where’s the challenge and sense of pride in that? Finishing what you’ve started and giving it your best effort is a major achievement and worthy of praise.

In my life I have taken first place, I have taken The Red Lantern and I have given up. I’m very proud of my wins and my last place finish, but I hugely regret the times I gave up, and the things I have not been brave enough to attempt.

Lets remember to celebrate the effort, as well as the outcome. As one of the Race With The Bus participants said to me as he was walking away, “we’re all winners.”