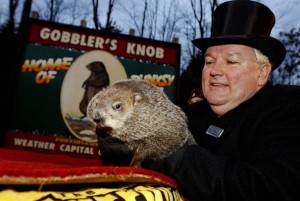 Groundhog day is celebrated on February 2 in the United States and Canada. According to folklore, if it’s cloudy when a groundhog emerges from its burrow on this day then spring will come early. If it’s sunny, the groundhog will supposedly see its shadow and retreat back into its burrow, and the winter weather will continue for six more weeks.

Is it me or does that make absolutely no sense? Read it again and think about it. I got the paragraph from Wikipedia. They know their shit, but it’s the logic that has me confused.

From what I can tell there are a few groundhogs around the country that have been coaxed into predicting the weather. There’s Jimmy the groundhog, Wartian Willy the groundhog, Staten Island Chuck and the most famous, Punxsutawney Phil. PP lives in Punxsutawney, Pennsylvania and does his work there. Being a person that hates the idea of caged animals I don’t much care for this practice especially after seeing photos of these critters. While they all look well-groomed and “healthy” they’re all extremely chubby and perhaps (although I’m not an animal fat specialist) very over weight. I fear they all could use a bit of exercise and some diversity in their daily routines.

That brings me to the Movie Groundhog Day with Bill Murray. Remember that? Bill plays a TV reporter who finds himself repeating the exact same day over and over again. After indulging in hedonism and numerous suicide attempts, he begins to re-examine his life and priorities and eventually realizes he’d be wise to take advantage of the situation and break out of his patterns. Once he makes some changes to the cycle, his life improves and all is well. Storybook ending so to speak.

Unfortunately Punxsutawney Phil probably doesn’t have the option to change his ways to better his life and health but you and I do. I’ve said it before and I’ll say it again; change it up, mix it up, challenge yourself, excite yourself and you’ll become a more rounded athlete, happier, flexible, interesting person. Doing the same thing over and over again makes you good at one thing and teaches your body and mind to move only in that one direction, and eventually it will fight back.

Lets start with this: today brush your teeth, your hair and open doors with the opposite hand you normally do.  Just try it!

It’s hot. Hotter than it should be…
The view from my office today.
Green is the new gold! #thankyoufog #gratitude #somethinggoodeveryday
Tall Twisty Manzanita, cool blue sky, fluffy green moss, sweat on my brow, the bestest company. #somethinggoodeveryday #gratitude
Just a few of my favorite things…
There’s something special about shadows… #gratitude